A playbook (formerly called a flow) codifies a security analyst's intelligence on how to analyze the imported data sets. A playbook incorporates the analyst's expertise in a logical process to take multiple inputs and apply data reduction and advanced correlation techniques to generate a single score or ranking as the output for each event. The playbook results in a decision for each event about whether it is acceptable or suspicious.

To view or work with playbooks, you must be in a group that has Playbook permission. For more information, see Manage Users.

A playbook can begin with an event type or other automation that ingests data. In the graphical playbook creation process, you create steps based on the actions you want to perform and can view the results of each step and of the overall flow of the playbook. The playbook codifies the logic, and the playbook output is the ranking.

LogicHub offers two different playbook editors. You can switch between the two at any time.

Steps
A playbook consists of steps (also called nodes) that perform functions that include ingesting data, executing automations, and doing calculations, tasks, scoring, and other operations.

In Advanced Mode, you can use the Step option to create a diagram or summary of the playbook that you want to build, where each element is a defined automation. After creating the step, you can specify the type of automation: module or integration.

Module
A module is a step that automates a particular function, such as formatting output, parsing a string, or downloading emails. Modules are available in Easy Mode and Advanced Mode.

Integration
Integration is a step that interacts with other systems or tools to bring in external information about threats. Integrations are available in Easy Mode and Advanced Mode.

Computation
A computation step in Advanced Mode specifies a query that allows you to extract results from the data source. You can enter your own custom query, or select from a set of query operators or user-defined functions (UDFs). For example, you can add a computation step to a playbook to add a dimension to your dataset using LogicHub Query Language (LQL).

A computation step is shown with a green header.

Task
A task step in Advanced Mode uses a runSearch operator to run a search or a callScript operator to execute a script.

A task step is shown with a gold header.

Scorer
A scorer step in Advanced Mode is a mechanism to apply manual feedback from an analyst so that individual events can be scored higher or lower on an exception basis.

A scorer step is shown with a purple header.

The following playbook flags suspicious URLs from a set of alerts.

Although the examples in this topic use Advanced Mode, you can create most playbooks using Easy Mode.

Playbooks can be much more extensive with multiple event types and interrelated actions. The following playbook extends the analysis of the previous example by adding additional event types for traffic and syslog messages for filtering, aggregation, and scoring. 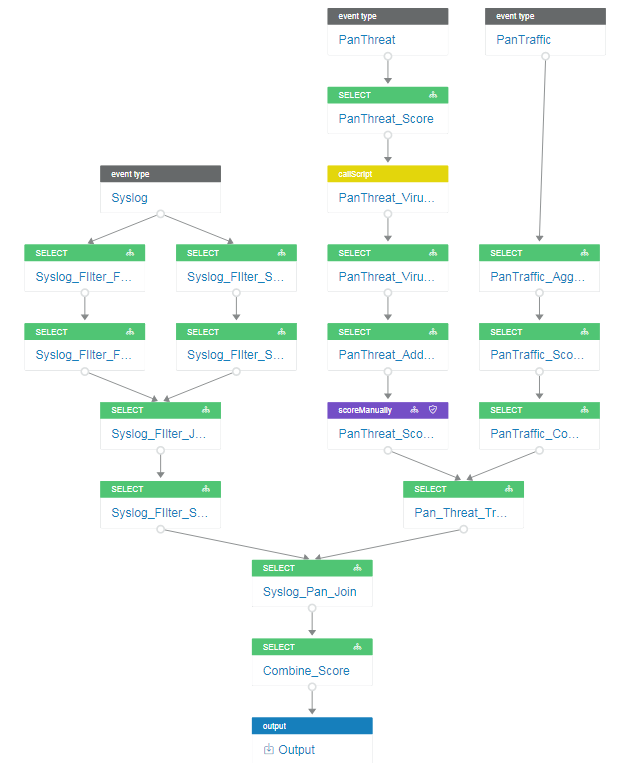 The following playbook includes steps that are shown with red headers. Each step contains a module or integration. A module automates a particular function, and an integration interacts with other systems or tools to bring in external information about threats.

This playbook takes a set of URLs as input and groups them to get a set of unique URLs. It then uses an OpenPhish integration to compare the URLs against known threats. Finally, it uses a module to parse the results and produce a score for each URL.

You're now ready to build a playbook. The easiest way is to use Easy Mode.