Playbooks are automated multi-step processes. They can ingest events or other data, process it, and take actions conditionally. This guide is intended to educate you about the different terms, functionalities, and features in the playbook builder.

We recommend you get familiarized with the following key concepts of the playbook. 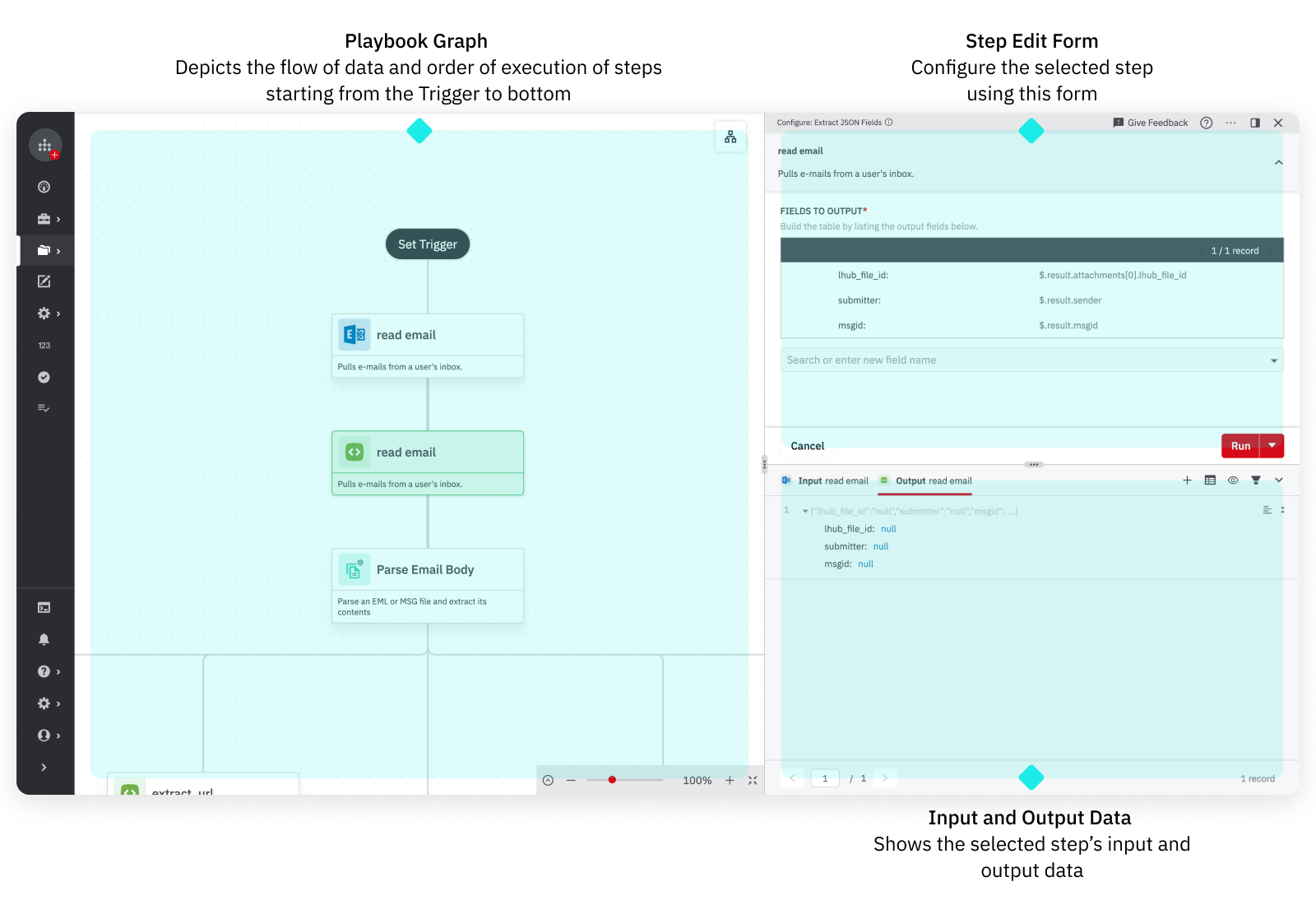 Now that we’ve got the high-level overview, let’s look into the details.

Steps are the building blocks of Playbooks. They can perform a variety of functions, including interaction with third-party tools through integrations. For example, receive alerts from third-party tools, sending and receiving emails, and so on. For functioning, it requires input data or events according to the type of step. After running, steps generate output data or events that can be used in subsequent steps.

Steps are combined into the sequential workflow that makes the playbook. The steps are executed one after the other from top to bottom. And the data flows from one step to its child steps after it is executed. The visual representation of steps, the playbook diagram, is found on the left-hand side. And its configurations are done on the right-hand side by clicking on each step.

How to Choose a Step to Add

To add a step in a blank playbook:

The catalog of all available steps will appear on the right side to add and configure steps. 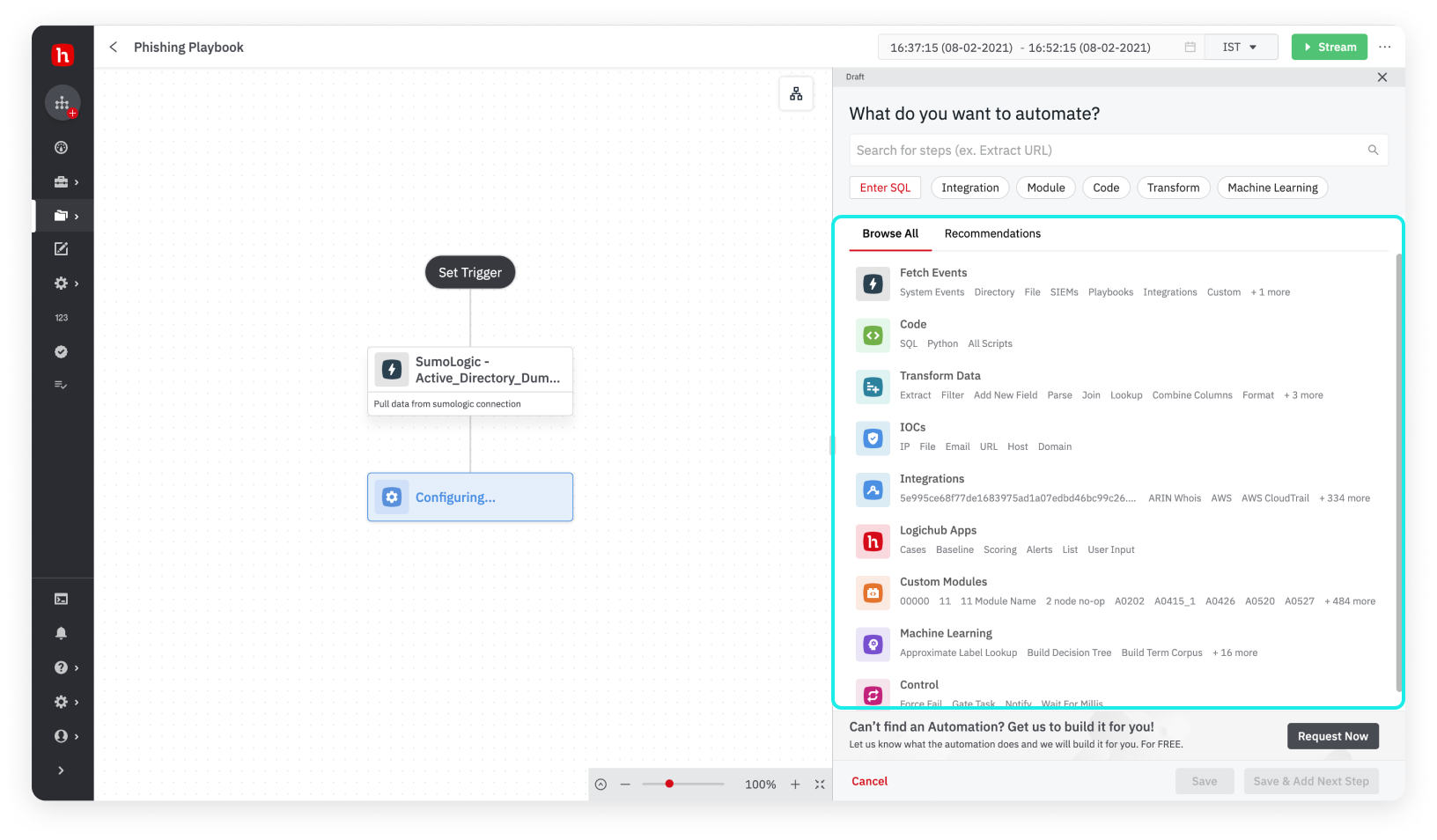 How to Configure the Step

Each step requires input data and it also generates output data. The input can be pieces of data external to the playbook or can be from other steps in the same playbook. This input is manipulated or enriched depending on the type of the step and output is generated. If you look at the example of the filter mentioned in the section above, we chose to filter out, all rows in which the value of column date_minute was 3, from the input data that will generate an output of only rows in which the value of column date_minute is 3.

To view input and output data of each step, click on a step and switch between the Input data and Output data by clicking on the tabs.

Usually, playbooks run based on something that has happened; whether it be logs of events from an enterprise tool or a SIEM. You can also run it on alerts that are already generated by another security tool. Therefore, the first step of the playbook is to retrieve these events from those tools using Event type and Integrations. These events that are retrieved will act as 'input' to the first step and its output can be used by the subsequent steps in the playbook for further processing.

We recommend you pick a balance between speed and being inclusive to account for all different types of events that could happen. While actually streaming the number of events ingested will depend on the batch length.

When it is triggered each time, the playbook will ingest all the events that fall in the latest time period equal to the user-set batch length. Each such run is called a batch. The batch results are stored in My Library > Streams. In each batch run, steps are executed one after the other starting from the step(s) directly under the Trigger step. If there are multiple child steps under a step, they are executed in parallel.

The results of each batch run are inherently the output data of steps you mark as "Output Steps". As a best practice, we recommend you choose a step where the results of all the other steps come together. You can also choose multiple steps as Output Steps

A step won't be executed if one of its subsequent steps is not an Output Step.

To stream a playbook, for example, in an interval of 15 minutes: 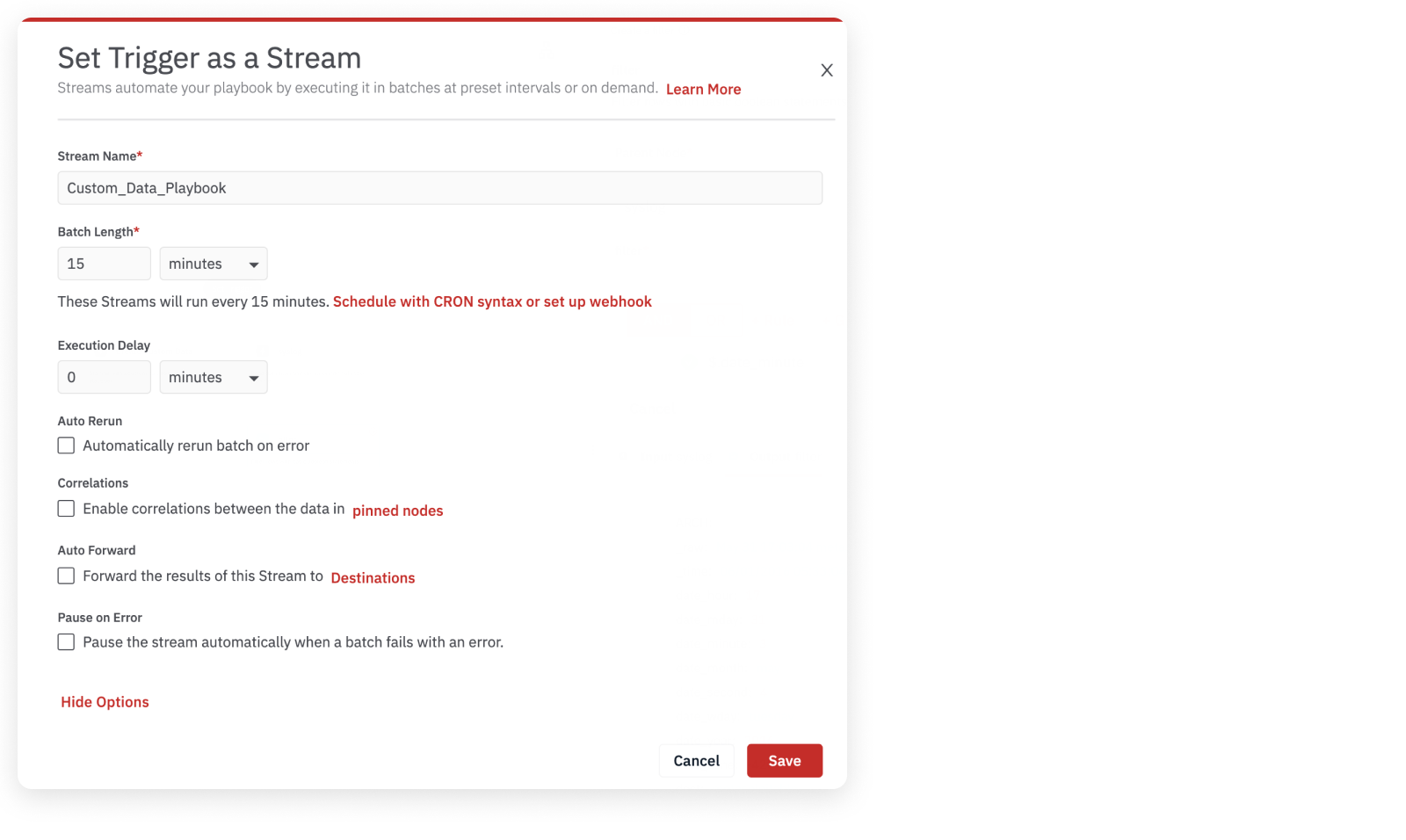 🔗   Add a Step to Import Events

🔗   Add a Step to Transform Data

🔗   Add a Step to Take Action in Integration

🔗   Add a Step to Create Cases and Alerts